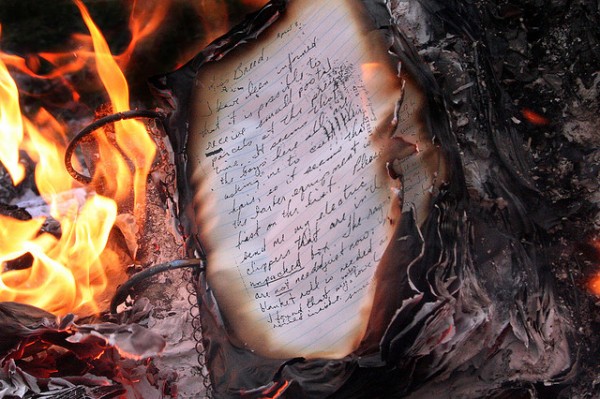 A few nights ago, I turned the final page of Ray Bradbury’s seminal work Fahrenheit 451—and found myself wondering how and where Bradbury gained his awe-inspiring prescience, because the dystopian world he created in 1953 is a little too close to the real world of 2015.

If, like me, you were never assigned this classic to read in school, it’s a dystopian work that Bradbury wrote when the U.S. was ensconced in the Cold War and the television was a brand new invention. Bradbury essentially asks in Fahrenheit, “What would happen if society became morbidly obsessed with TV, discarding the emotional resonance and knowledge in books for frivolous, digital entertainment?”

Well, the world of Fahrenheit 451 happens, a world where firemen don’t put out fires, they start them—for the sole purpose of burning books, which have been outlawed. If you’re found to have books, the firemen come to burn them and you’re arrested. If you run, mechanical hounds sniff out fugitives and kill them.

But Fahrenheit citizens aren’t angry or fearful. Rather, they go with the status quo. Reading and writing aren’t taught in schools. Concepts like love and happiness don’t exist. Citizens are anesthetized with TV screens the size of walls, “seashells” in their ears that transmit constant noise, pills, and monotony. Suicides are frequent, but emotionless. And despite frequent flyovers by military jets, no one seems concerned that a war or destruction could be looming.

In Fahrenheit, we follow Guy Montag, a fireman by trade who is married to Mildred and working hard to get her a fourth TV screen for their living room. One night, while walking home, Montag meets Clarisse, a young girl who simply strolls around town at night (unheard of in this society) and doesn’t own a TV, instead choosing to spend time talking to her flesh-and-blood family (also unheard of). Montag is immediately fascinated by Clarisse and at one point, calls her a “mirror.” Something is awakened in Montag and his emotional stirring hurtles him into a dangerous awakening.

When Montag starts to wonder about the taste of rain and the impending war and the words on the pages of books, he begins to set himself apart—and in doing so, makes himself a target for his neighbors, employer, and even the government. Will Montag be able to break the shackles of this oppressive society? And if can, then what?

While the story of Guy Montag and the society of Fahrenheit is fictional, the parallels to modern society are uncanny. We’re living in a world where books are fading into the background and TV reigns supreme. Even the format of books is changing. Everything is going digital, impersonal, intangible. Pretty soon, I fear the firemen of Fahrenheit 451 wouldn’t have anything to burn in our world. Perhaps they’d consider that an accomplishment.

The character of Mildred, Montag’s wife, is an extreme caricature of societal influence—and yet she doesn’t seem like such a stretch in today’s world. Mildred is always plugged in. Those “seashells” don’t leave her ears (can you say ear buds or Bluetooth devices?). Instead of spending time with her husband at night, Mildred goes into the living room to spend time with her “family,” the characters that talk to her through her TV (complete with name personalization, because that’s not creepy or anything). How many people watch the Kardashian family on TV instead of having dinner with theirs?

And, of course, Mildred takes handfuls of pills to “help her sleep,” and can’t remember when she overdoses. She shrugs off her brush with death and continues to live her life drugged and deluded. How often do we push pills instead of dealing with larger issues like depression, unhappiness, and restlessness organically? We often turn to anesthetization—a quick fix for a larger problem, because it seems simpler. But at what cost?

I finished Fahrenheit 451 a few days ago, but I think I’m finally getting around to digesting it today. It’s a hard pill to swallow. But also an important one.

Now I wonder—if Bradbury wrote another dystopian novel based upon the society of 2015, what would be next to burn?