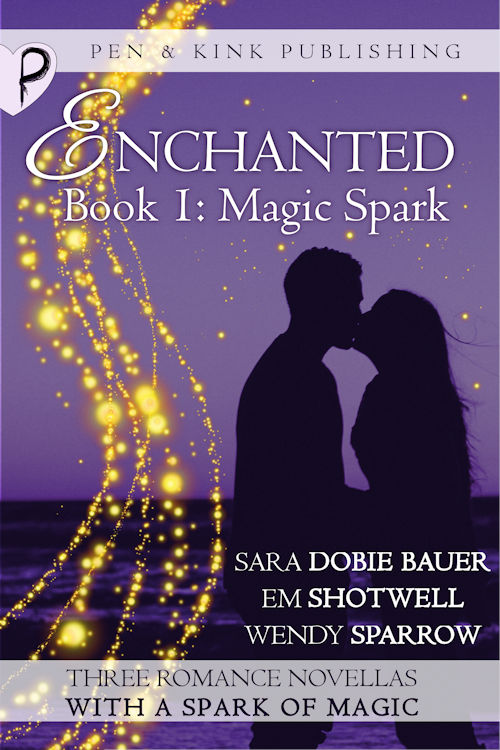 Today, Pen and Kink Publishing has a new book out in the world – Enchanted: Magic Spark! Hooray!

To celebrate the release, I have the ever-witchy, ever-fabulous Sara Dobie Bauer on the blog for an interview. But first, here’s a little about the Enchanted: Magic Spark…

The first of a trio of trilogies by three amazing romance writers. These stories all have two things in common: magic and romance!

“When Demigods Court Death” by Wendy Sparrow:
As the demigod of fertility, Aster Slone has a thriving doctor’s practice. In fact, the incidence of triplets has made it too thriving. He needs more time with his neighbor the demigoddess of death to dampen his powers. Chandra Linton being gorgeous and sweet makes his task less of a hardship. Hitting the zenith of heretofore-unknown powers without enough exposure to her match is killing Chandra. Accepting all that her crazy, but hot neighbor says is her destiny…well, it muddles her convictions, but her real concern is: does Aster want Chandra because she’s the woman he desires or because she’s Death?

“These Roots Run Deep” by Em Shotwell:
Spitfire, New Orleans weather girl, Cheyanne Murphey has everything, and that is exactly how she likes it. When she discovers evidence of her fiancé’s philandering, she refuses to let her perfectly cultivated image fall to pieces. Cheyanne has worked too hard, dragging herself up from the trailer park into New Orleans’ society, to give in without a fight…even if that means trading a year of her life in exchange for a love incantation from her ancestor’s spell book. A skyclad, moonlit dance, a mysterious potion, and magic gone awry leave Cheyanne with a very peculiar life lesson: love can take on many forms, so be careful what you wish for.

“Destiny’s Dark Light – Part One” by Sara Dobie Bauer:
In modern day Charleston, lonely white witch Cyan Burroughs has waited her whole life to lead the battle against dark witches and eventually meet the man she is fated to love. A tragic trolley accident brings Liam Cody into her life. He is her destiny, but he’s also in love with someone else. Now, Cyan and her magic family must find the dark witch who caused the accident while Cyan fights her feelings for Liam—a charming Irishman with secrets of his own.

What is it about witches that gets your cauldron bubbling? Why do you love them and love writing about them?

Ever since watching The Craft when I was, like, a fetus, I’ve been obsessed with the idea of being able to cast spells and make shit happen. I went through a phase where I played with magic, actually, although I wasn’t really serious about it. Plus, witches (sort of like vampires) are historically sexy and cool. I further fell in love with them thanks to the epic hotness levels of Sandra Bullock and Nicole Kidman in Practical Magic. Meow. The idea of being able to use “powers” to do things just seems so cool. I mean, who doesn’t want to go to Hogwarts?

Give us a five-word explanation of part one of “Destiny’s Dark Light.”

Okay, okay, that was mean. Give us a longer pitch of the story.

(Jeesh, that was super mean!) In modern day Charleston, lonely white witch Cyan Burroughs has waited her whole life to lead the battle against dark witches and eventually meet the man she is fated to love. A tragic trolley accident brings Liam Cody into her life. He is her destiny, but he’s also in love with someone else. Now, Cyan and her magic family must find the dark witch who caused the accident while Cyan fights her feelings for Liam, a charming Irishman with secrets of his own.

Enchanted: Magic Spark presents the first installment of “Destiny’s Dark Light,” so yes, it does end on a cliffhanger. Part two comes out in February and part three in April!

Anyone who’s read your work (and interviews about your work) knows that many of your male love interests are based upon your real-life muse Benedict Cumberbatch. Is there a particular Cumber-look or Cumber-era upon which Liam Cody, the sexy Irishman in “Destiny’s Dark Light,” is based on?

You bet. Liam’s look is based on a precise event. Benedict did a reading at the burial of Richard III. (He’s even distantly related to the hunchback king AND he played Richard III in The Hollow Crown.) Liam’s short, auburn hair and bespoke suits all revolve around Benedict at this specific event, and yes, I am a huge nerd. 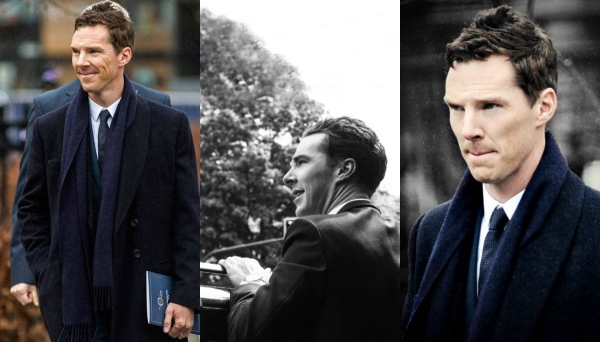 Obviously, destiny plays a big role in this story. I mean, it’s in the title. And a little birdy told me there’s something about a prophecy in your tale. In real life, how much do you believe in destiny versus happenstance? How does your personal view align or contrast with those of the characters in “Destiny’s Dark Light?”

I don’t believe in “destiny,” but I believe in a guiding God, so … hmm. I believe some things are meant to be in our lives. I believe I was meant to meet Jacob Anthony Bauer at a dive bar in Charleston, fall in love with him, and eventually marry the guy. I believe I am supposed to be a writer, but is that destiny or a personal decision? Arguably, it was destined to happen because everything else I tried failed—but I had to decide to keep moving beyond the failure to eventually follow the career I loved. Perhaps, destiny is a sort of guidance, but we can accept it or deny it.

The characters in “Destiny’s Dark Light” believe in destiny wholeheartedly, no matter the crappy repercussions. Cyan was destined at birth to be the light witch who would kill the dark witch—or die trying. She’s also destined to love Liam. She might not like her destiny, but she accepts it … Well, at least in part one …

Why should readers pick up Enchanted: Magic Spark?

Readers get three very different stories from three very different female authors, all focused around magic and romance. I’ve been a fan of Wendy Sparrow and Em Shotwell for ages, so I’m honored to be included in the Enchanted series with them. You really don’t want to miss this!

Got any prophecies for 2018? (I’m thinking perhaps we could use some!)

Let me check my crystal ball—and by crystal ball, I mean my absinthe glass. Yes, I see a wedding in Phoenix. (See you there, Tiff.) I see me, naked on a moonlit Florida beach at some point. And I see a world not ruled by social media but founded on patience and love … but that’s probably only in my dreams. Oh, and I’m totally gonna hug Mr. Cumberbatch one of these days. 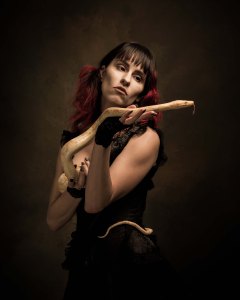 Sara Dobie Bauer is a bestselling, award-winning author, model, and mental health advocate with a creative writing degree from Ohio University. Her short story, “Don’t Ball the Boss,” inspired by her shameless crush on Benedict Cumberbatch, was nominated for the Pushcart Prize. She lives with her hottie husband and two precious pups in Northeast Ohio, although she’d really like to live in a Tim Burton film. She is author of the paranormal rom-com Bite Somebody from World Weaver Press, among other ridiculously entertaining things. Learn more at http://SaraDobieBauer.com.